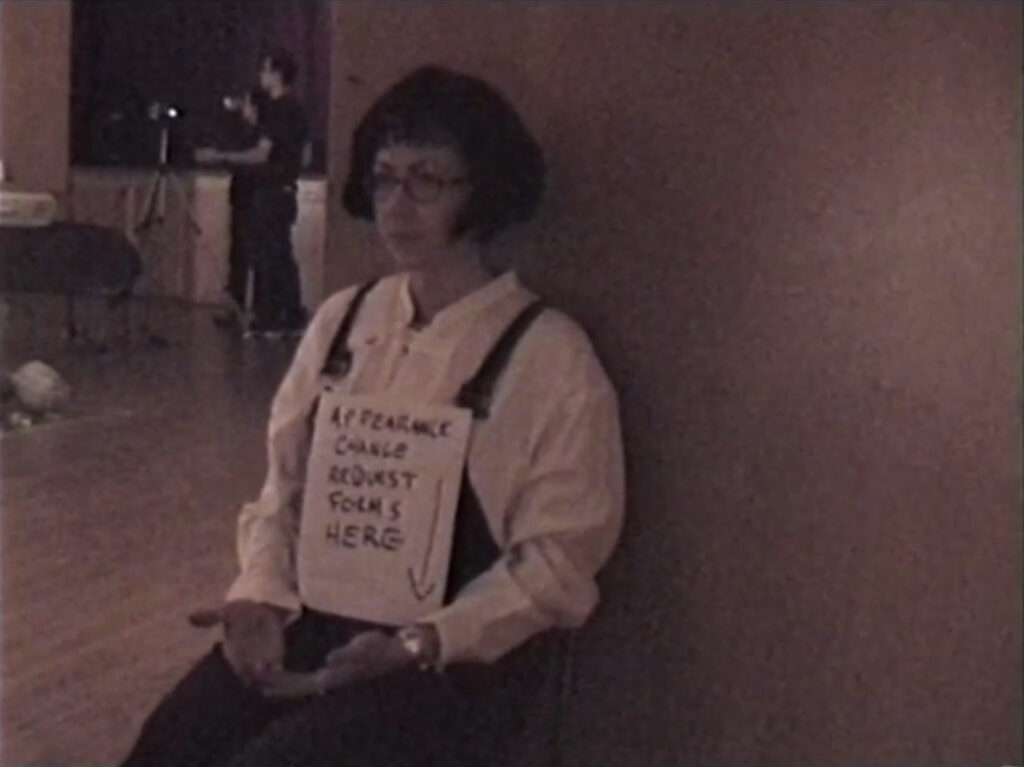 Master Class 5 was a collaborative experiment in performance image-making process. Five artists ranging from emerging to well established were brought together to join in a four-hour collective exploration of the formal, aesthetic and political concerns in performance. Performers created individual solo works with the understanding that through proximity, intervention and action, the performances might begin to interweave and inform each other. Particular attention was paid to the points of interactivity among the performers and with the audience. Terril Calder chose to construct works that relied directly on audience interaction and participation. Using surveys, testing stations and request forms, she worked with the terrain of body image, constantly altering her own appearance according to the written request of various audience members.

Terril Calder is a multidisciplinary artist who has been involved in producing and exhibiting art for the past ten years and has been active in performing, and organizing multi-media events in Winnipeg, Manitoba with the Student Bolshevik Collective and later in Toronto, Ontario with the 7a*11d Performance Art Festival. Her work employs a variety of media and disciplines. Earlier performances were an exploration between the horrific and the amusing. The work focuses on issues relating to the female human, and the consequences of hereditary conditioning in both genders and encompasses “living art” as a means of research and survey ratios conducted by “The High Priest of the Temple of they”, to calculate percentages of what “they ” say. Since completing the 3-D computer animation and multi-media development course at the Computer Technology Institute in 1999, combined with earlier training she received through Video Pool’s first video fund in 1993 she is now exploring experimental video production that incorporates all of her previous disciplines. Within the last year she has been exploring the amalgamation of animation, performance, and video. 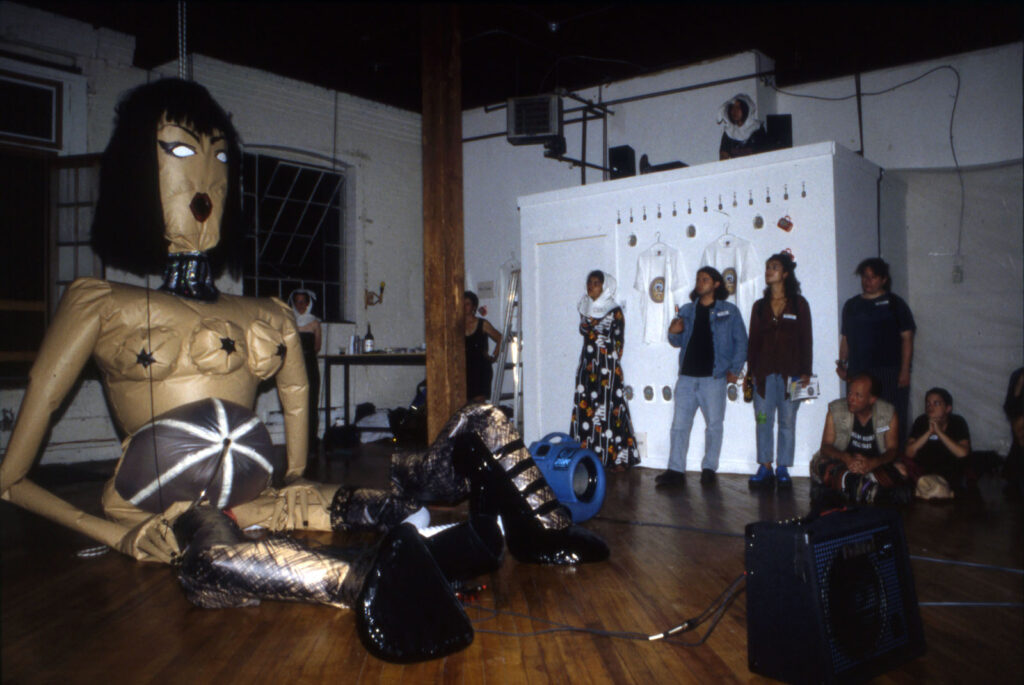 Curated by Johanna Householder and Louise Liliefeldt as part of Hybrids

Terril-Lee Calder performs The Suckiling, a new work that deals with consumerism and body image. Her work combines spectacular large-scale visual imagery, created in multiples, and an ambient performance within the spectacle that plays on ideas of marketing, opinion surveys and mass production. This is the latest in a series of related performances that include last year’s Pigs on Parade (7a*11d 1997).

Terril-Lee Calder has been exploring performance art for the past 9 years. She received a B.F.A. degree at the University of Manitoba in 1992. Before moving to Toronto, Terril participated in various local performance art events in Winnipeg —Ace Art Performance Art Benefit, Festival Du Voyeur, Video Pool, Gallery 1.1.1. — and was a member of the Student Bolshevik collective. Since migrating to Toronto Terril’s work has presented by Shake Well, All Sass Lorraine, Spank Performance Art, the Yellow Hat collective, and 7a*11d. 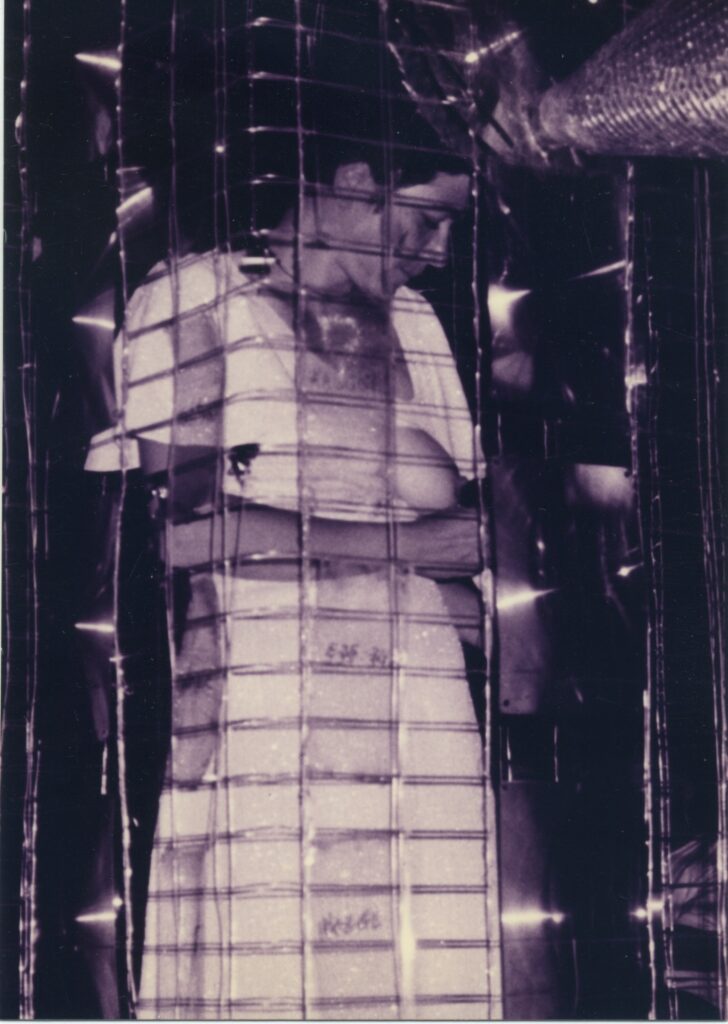 Terril-Lee W. Calder-Fujii had been exploring performance art for the past 8 years. She received a B.F.A. from the University of Manitoba in 1992. Before moving to Toronto, Terril participated in various local performance art events in Winnipeg, including Ace Art Performance Art Benefit, Festival Du Voyeur, Video Pool, Gallery 1.1.1., and as a member of the Student Bolshevik collective. Since migrating to Toronto, Terril has been appeared at Shake Well, All Sass Lorraine performance gallery, and Spank Performance Art Event. She is currently working on a concept/life piece with the assistance of the Ontario Arts Council that will be completed in the spring of 1998.