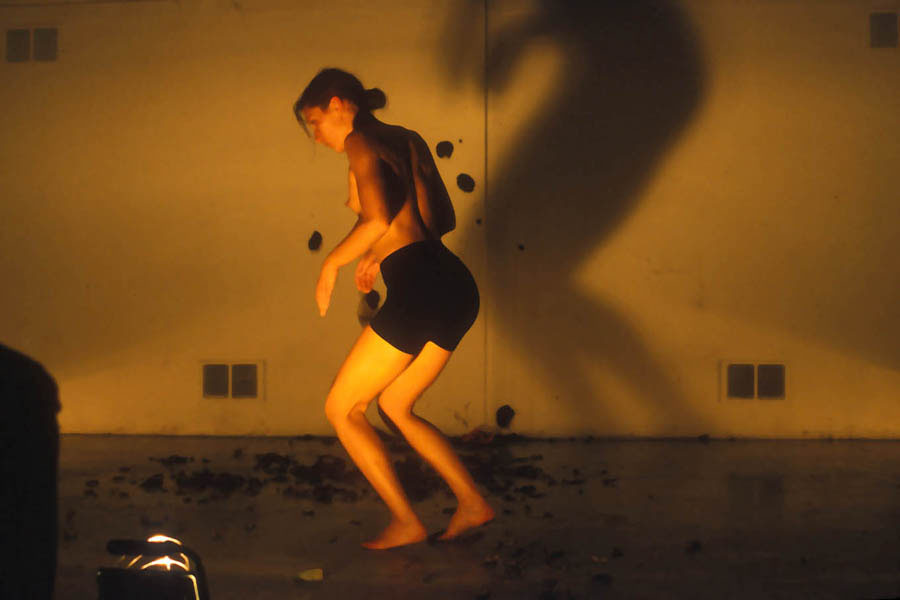 Curated by S. Higgins & W. A. Davison as part of StrangeWays—Currents of the Fantastic in Contemporary Performance

This untitled full-length solo performance by Susanna Åkerlund, created for the festival, featured a live improvised soundtrack by the Toronto-based experimental music group Six Heads. The performance moved both metaphorically and figuratively between dark and light, silence and sound, stillness and movement. Åkerlund began as a faceless figure, her head bound in fabric, enacting a well-articulated drama of struggle and trauma that was a virtual encyclopedia of Butoh imagery, from embodying Munch’s Scream, to facing a firing line of mud and organic waste (thrown by members of Six Heads). The eventual uncovering of her face was accompanied by a transformation into the gestural and psychic terrain of a barnyard bird. In the words of a previous review, “This is Butoh close to the roots: raw and ugly, grotesque and frightening, far away from Sankai Juku’s polished esthetic performance art.” (Orjan Abrahamsson, Dagnes Nyheter, Jan. 1/2000)

SU-EN Butoh Company was founded by Susanna Åkerlund in Tokyo in 1992 while she was a student of Tomoe Shizune and Yoko Ashikawa. Since Akerlund’s return to her native Sweden in 1994, SU-EN Butoh Co. has presented choreographed pieces, site-specific happenings, and improvisations — both solo and in collaboration with many different artists and musicians — at festivals and events in Scandinavia, Germany, Russia, Czech Republic, Japan, USA, Argentina, Slovenia, Croatia, and Holland.