We approach our bodies with various kinds of attention and consciousness: avoiding danger, preserving belongings or relationships, finding various types of opportunity, seeking interesting ways to enter through eyes, ears and … using our reflexes or our senses.

How can we train these senses?

I, personally, don’t like to do or watch any sports, but we can use the tools of sport for other intentions. For example, art performances.

Sakiko Yamaoka was born in 1961 and is based in Tokyo, Japan. She studied oil painting in Musashino Art University, Tokyo, but has been focused on performance art practice since the 1990s. She has taken part in various performance art festivals across Europe and North/South America, Korea, China, and South East Asia. Taking the thought of performance art as a fated process and approaching the body as a single place/knot, she builds a practice extending across event production, moving images, photography and drawing, focusing on themes of public/private space, sculptured time and the consciousness of bodies.

Sakiko writes: “Since my previous time in Toronto in 2008, I have had many struggles/questions/learning/amazing things, like everyone. I was in Spain in 2011 when the earthquake hit Japan. Before then, I was not focused on making work in Japan, but after the earthquake I wanted to go back right away. Now I have started to ‘live’ in Japan more deeply. BUT! What does it mean to belong to one nation? Ambiguous. Instead of the idea of ‘nation’, I decided to think about the people and the culture near my living area. I am still ‘living’ in a kind of network of people through performance art. And I am also ‘living’ in a kind of cultural scene of people in Tokyo. In this second place, people still don’t know and don’t like performance art. This is my major struggle. In 2016, I  started to build a performance art archive, focusing on moving images. I sometimes organize events to show moving images which I took in the world. I am developing these activities by working with younger people.”

Thanks to the City of Toronto’s John Innes Community Recreation Centre for donating the use of their space.

Come find KinesTHESES artists in residence Stephanie Marshall and Sakiko Yamaoka as they engage in a kinesthetic dialogue together. In lieu of an artist talk, the two will communicate with each other and a local public of passersby through a series of spontaneous street actions. 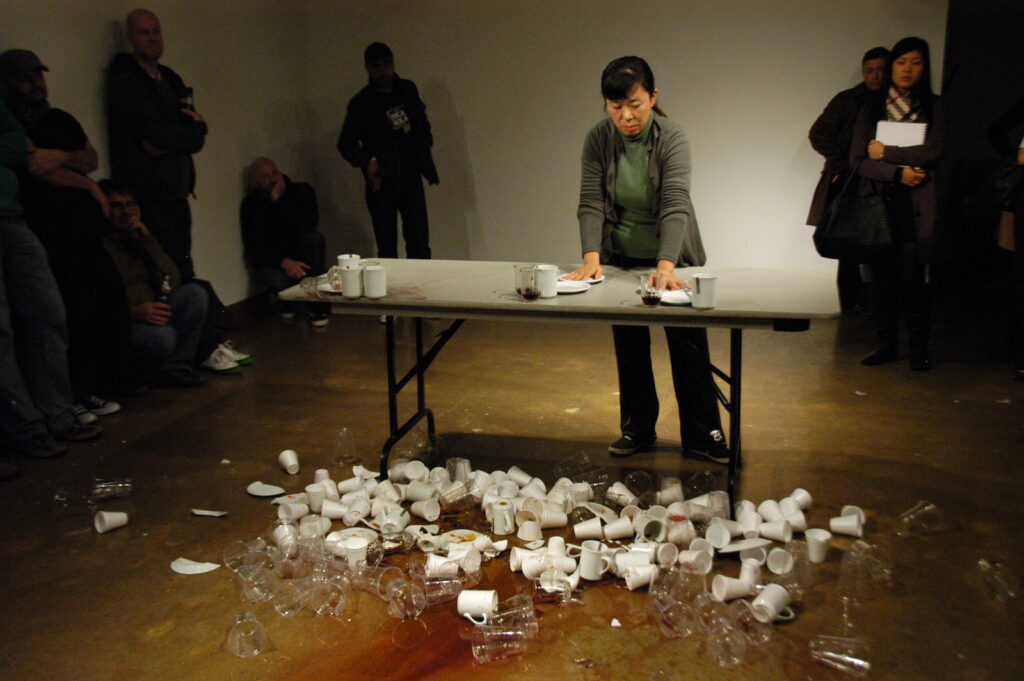 Delusion is the central idea of my life. Sometimes delusion gives me the hope to continue, and sometimes it attacks me and tempts me to commit suicide. I saw a very attractive logical misunderstanding from a book about schizophrenia: “Human beings are alive. Plants are alive. Therefore human beings are plants.” I felt this to be true. I love such dramatics. I define my art-works as sculptures depicting action, time and the relationship between artist and audience, artist and materials. In my work, I attempt to create an example of the “human condition.” For the last several years, I have been working within the framework of the geographical, political, historical and social contradictions of Japanese consciousness.

Between 2007 and 2012, Best Place to Sleep has been performed in various cities including: Tokyo, Warsaw, Boston, Zagreb and Toronto. In this intervention into public space, the artist (sometimes alone and sometimes with a group of participants) occupies space in banks and bank machine kiosks by lying down on the ground and attempting to take a short nap. The performance ends when the artist is asked to leave the premises. Yamaoka will be performing this work in Toronto on October 27, at various locations, between 12pm-5pm with local participants.

Wind from Sky is a new work by the artist created for 7a*11d.

YAMAOKA Sakiko graduated from the Musashino Art University in 1984 as an oil painter. Her interests turned to performance in 1991. Since the early ’90s her work has been presented at international festivals and events in Japan, Korea, Singapore, Poland, Germany, Ireland, Slovakia, Indonesia and Thailand.