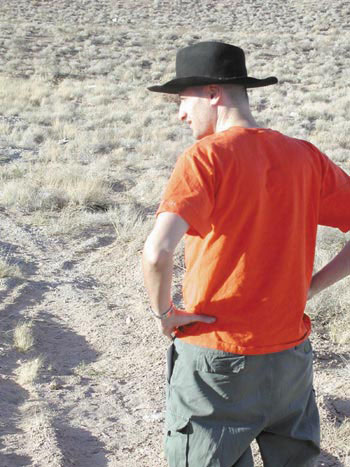 Who Is That Unmasked Man?
Thursday October 31
offsite

For Who Is That Unmasked Man?, Chris will spend his day at home in southern Illinois as the secret identity of a superhero. While people here know of his covert identity but are spatially removed from him, none of the people in physical proximity to him in Illinois will be apprised or aware of Chris’ sub-rosa double life.

For The Ballot Box white cube will be put on display with instructions and forms for many free projects, tests, and surveys. Just fill out a form and drop it in the hole! In as little as 30 seconds, you can participate in such projects as “Do I Know You?”, decide once and for all whether Chris is better than you are in “Am I Better Than You Are?”, take part in Chris’ attempt to number the entire population of the earth in the “Wildrick World Numbering System,” ditch your old identity and assume Chris’s in “Reproduction,” or find out whether fishes really are wishes in “If Fishes Were Wishes.”

Chris Wildrick grew up in Pennsylvania, went to college in western Massachusetts, did his graduate tour in Madison, Wisconsin, and subsequently moved on through Chicago and Las Vegas. He is now an Assistant Professor of Foundations at Southern Illinois University.