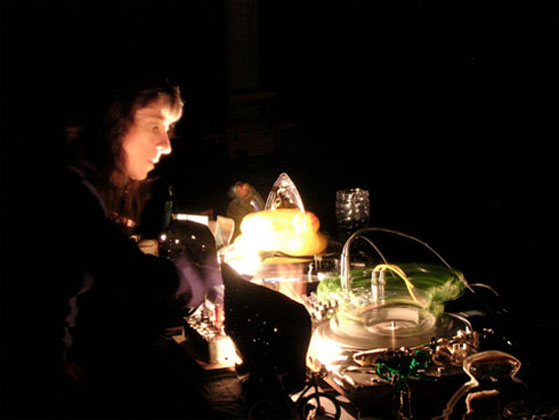 “Working instinctively she places everyday objects — a teapot, an ice skate, a rat, a pair of sling-back shoes, a trophy — on a pair of turntables, and watches the shadows they cast on the wall in front of her. These shadows, which rotate and swirl to a soundscape of exaggerated rumbles and scratches from the turntable, are utterly captivating; Shakespeare would have called them wondrous strange.”

—from a text by Robert Enright

Diane Landry lives and works in Quebec City. Since 1987, she has performed and exhibited in Canada, the United States, Mexico, France, Austria and Germany. The first monograph devoted to her work Diane Landry, Oeuvres Mouvelles was published by the Centre de diffusion et de production de la photographie VU in 1998. Her recent solo exhibition, Les sédentaires clandestins, presented at the Musée du Québec in 2001, was also accompanied by a catalogue and audio CD.