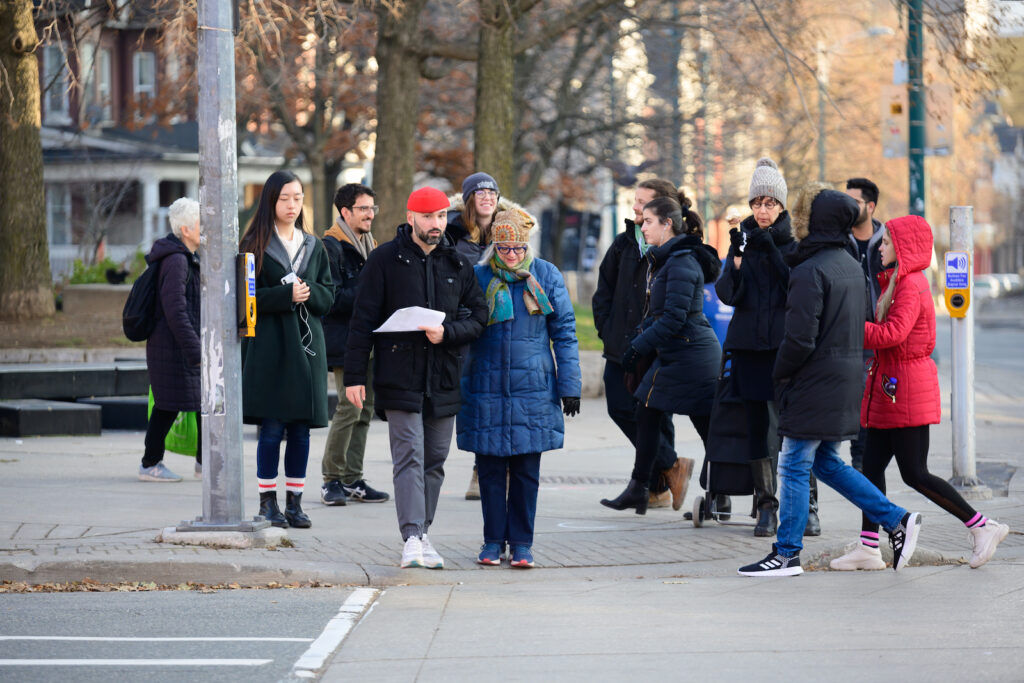 Traversing a square in every possible way translates one of Ferrer’s signature performance scores, Recorrer un cuadrado de todas las formas posibles, into a site-specific action happening along some of Toronto’s busiest downtown streets. The idea is simple: four points forming a square, each designated with a letter (A, B, C, D) are set up on the ground. The performer then explores a suite of proposed trajectories that generate variations on how to make one’s way through the square. The action mediates between pre-established paths of movement and the agency individuals have in terms of how they move. The performance will be led by artist Francisco-Fernando Granados and the score for the movements is available here and on our social media platforms to anybody wanting to join.

Since her early work in the 1960s as part of the Fluxus-associated ZAJ collective, Esther Ferrer has used bodies, time, and space as the primary elements for the creation of performances that extend minimal conceptual structures into richly embodied meditations on the power of presence, variation, and possibility. Ferrer’s work emerges from strategies of cultural resistance to the conventions and aesthetics of the Franco dictatorship in Spain and articulates forms of self-determination for the individual that are deeply informed by feminist and anarchist politics. Her work is consistently radical in its commitment to an economy of means, and to the notion that within her work “all variation are valid, including this one.”

Esther Ferrer is best known for her performances, which have been her principal form of artistic expression since 1965, both as a soloist and as a member of the group ZAJ until its dissolution in 1996. Her work has always been oriented to ephemeral artistic actions. She created, in collaboration with the painter José Antonio Sistiaga, the first “Workshop for Free Expression” in the 1960s, an activity that inspired similar groups in Spain. Since the 1970s she has also been active in various plastic arts: reworked photographs, installations, canvases and constructions based on the prime number series, Pi. Her work is a particular kind of minimalism, which she sometimes terms ‘rigorous absurdity’. Esther Ferrer has performed throughout Europe, North America, and Asia. In 1999 she was one of two artists representing Spain in the Venice Biennale. In 2006, she received Trace John Boehme Performance Art Lifetime Achievement Award, in 2008 the Spanish National Prize for the Arts, in 2012 the Basque government’s Gure Artea Prize, in 2013 the Mujeres en las Artes Visuales Prize, and in 2014 the Marie Claire Contemporary Art Prize and the Velazquez Plastic Arts Prize. 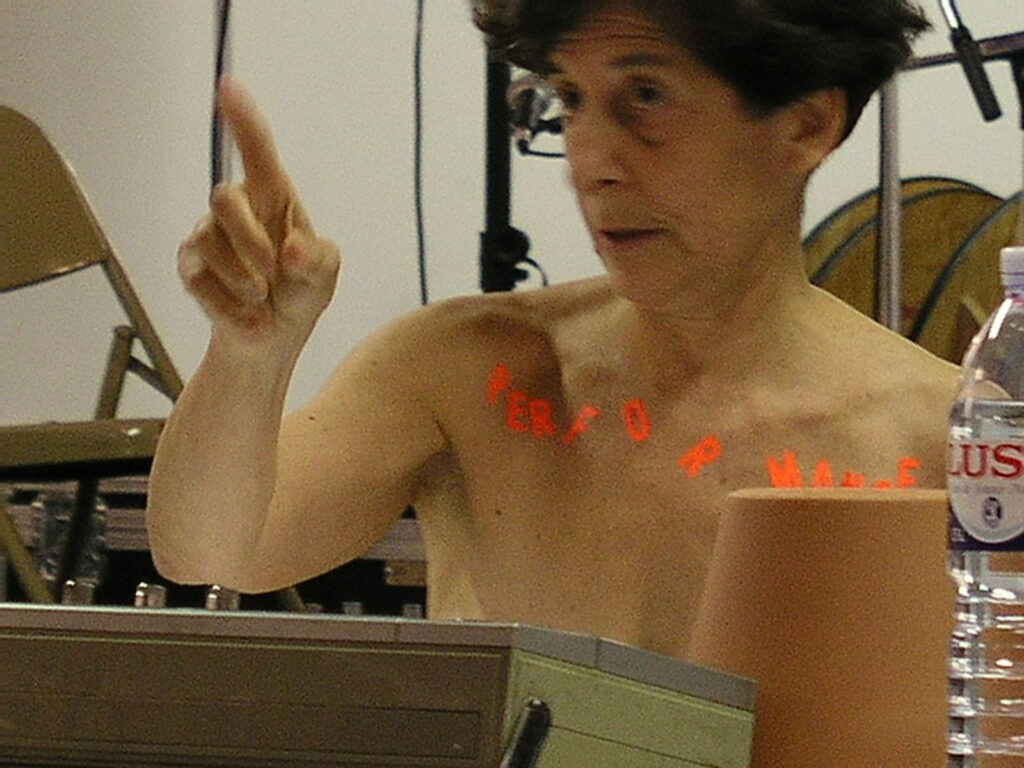 “Esther Ferrer strictly dissociates that core of the artistic work from all shapes of happenings or any other type of standing born in the XX century. Her actions deal with single subject; they are reduced to the extreme; they are not shows; they are not fiction; they are always anchored in the reality while being artificial and in a new context. They represent nothing. Their emptiness and absurdity turn the viewer into an interpreter; they submerge her/him in a process of interpretation. Even if the viewer behaves reluctantly or even leaves, she/he continues participating actively …” – Helga de la Motte “Rationality and unpredictability.”

Performances have been Esther Ferrer‘s principal form of artistic expression since 1966. Her work, both as a soloist and as a member of the group ZAJ, has been oriented to ephemeral artistic action rather than to permanent artistic production. She created, in collaboration with the painter José Antonio Sistiaga the first “Workshop for Free Expression” in the 1960s, an activity that was to inspire other similar groups in Spain. Other visual art projects include reworked photographs, installations, canvases and constructions based on the prime number series. Her work is a very particular kind of minimalism, which she sometimes terms “rigorous absurdity.” She has performed throughout Europe as well as in Cuba, the US, Canada, Japan and Korea. In 1999 she represented Spain in the Venice Biennale.