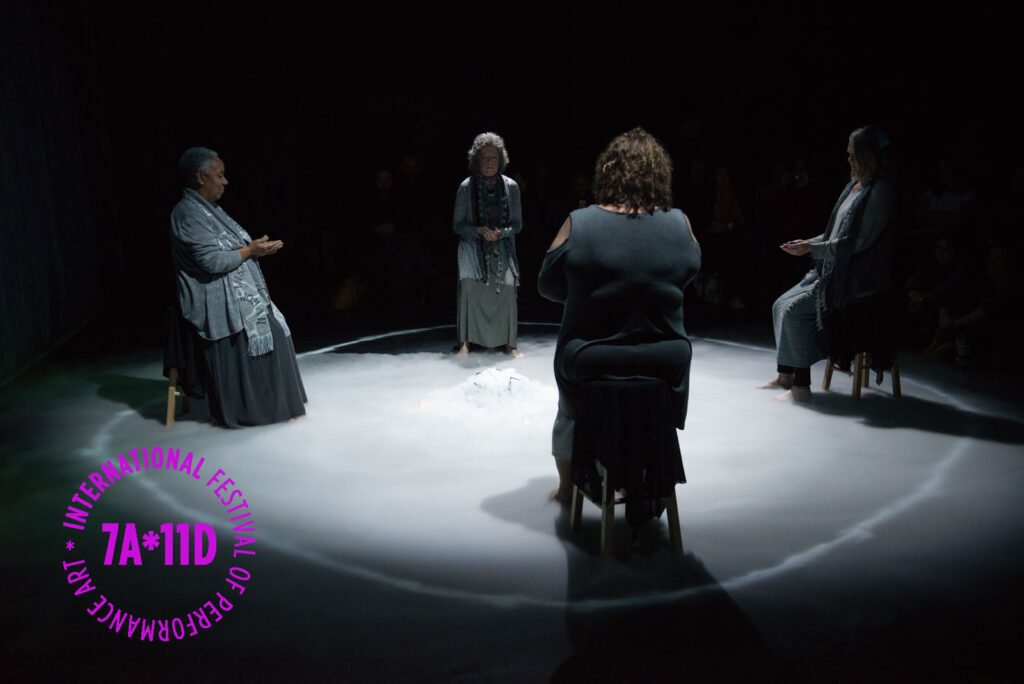 Roles for women, dictated or chosen, are a constant thread through my work, along with the freeing choice to take on different personas. In Vigil: Field of Crones I will collaborate with three “fellow crones”—Lillian Allen, Anne-Marie Bénéteau and Cat Cayuga—to develop a recuperative ritual, enacting the notion of the “morphic field,” a collective, unifying memory or identity that is a powerful agent for patterning new modes of behaviour.

Sandra Vida has been an important contributor to the coming of age of activist-oriented, feminist performance, film and video practices. Her time-based, multimedia and installational works often reflect her Scottish Celtic ancestry through spiritual exploration, psychological concepts and poetic text. Performances often involve a reclaiming or restorative impulse and a meditative sensibility. Her performance-to-camera video works focus on the experiencing (female) body engaged in what artist/writer Mireille Perron calls “a daily making and re-making of the world,” demonstrating “an enduring capacity to (re) invent the self in liminal spaces.”

The artist acknowledges the support of the Calgary Arts Development Authority.

My biography describes my artistic work over three decades, but my identity, like everyone’s, is more complex. As a multimedia artist, even my practice has been hard to pin down. I see the content as primary, and the choice of medium secondary.

Identity is slippery, and I think mutable; on the face of it, I am a woman, an affiliate of various communities, including several local and regional arts groups and organizations, a circle dance/drumming group and a choir. I’m a family member, a partner, a sister, and an aunt. I’m the daughter and granddaughter of strong Scottish women.

I was certainly influenced by both my parents, who were leading lights in Calgary amateur theatre during my early years. Watching the magic that consistently and surprisingly occurred when accountants, dentists and teachers transformed into criminals, queens and pirates under the stage lights made a lasting impression. And this perhaps partly explains my being drawn toward performative work, the transformative alchemy of combining images, actions, and effects.

The timing of my university studies in art history, English and psychology in the 1960s saw the rise of an exciting global activist consciousness; however, courses offered very little in the way of female artist role models. Those, I had to find myself after graduation, and I found many—artists like Carolee Schneemann, Linda M. Montano, and Eleanor Antin breaking ground in the U. S. and, closer to home, Marcella Bienvenue, Anna Banana, Margaret Dragu and Tanya Mars, mining their lived experience and social context for performative potential, what Eleanor Antin called “the self getting a grip on itself [….] a particular type of transformation in which the subject chooses a specific, as yet unarticulated image and proceeds to progressively define [herself].”[1]

Early work in performance and installation was about claiming space and presence, literally placing my self within the frame. Feminist writers like Lucy Lippard, Gloria Steinem, Donna Haraway, Griselda Pollock, Hélène Cixous and Luce Irigaray served as guides and compass points. I invented other mentors: in one instance in the ’90s, I pieced together a partly invented narrative about my great aunt from the clues I could find, and took on her persona to walk the pathways where she might have lived and worked in Glasgow, uncovering lost languages and alternative histories. As I turn 70, I realize I’ve become a model and mentor myself to emerging artists and colleagues.

I search for alternatives; you might say my work is about alternatives. Working in artist-run culture (at the local, regional, and national level for many of my art-making years) sprang from the same impulse: Diana Nemiroff said, “[Artist-run centres’] alternative was of an exemplary, rather than oppositional, nature [….] to exemplify in their own structures and conduct an alternative set of ideals, assuming the independent realization of their ultimate values, within the circumference of their own activities.”[2] I aim to create situations that enact a preferred reality.