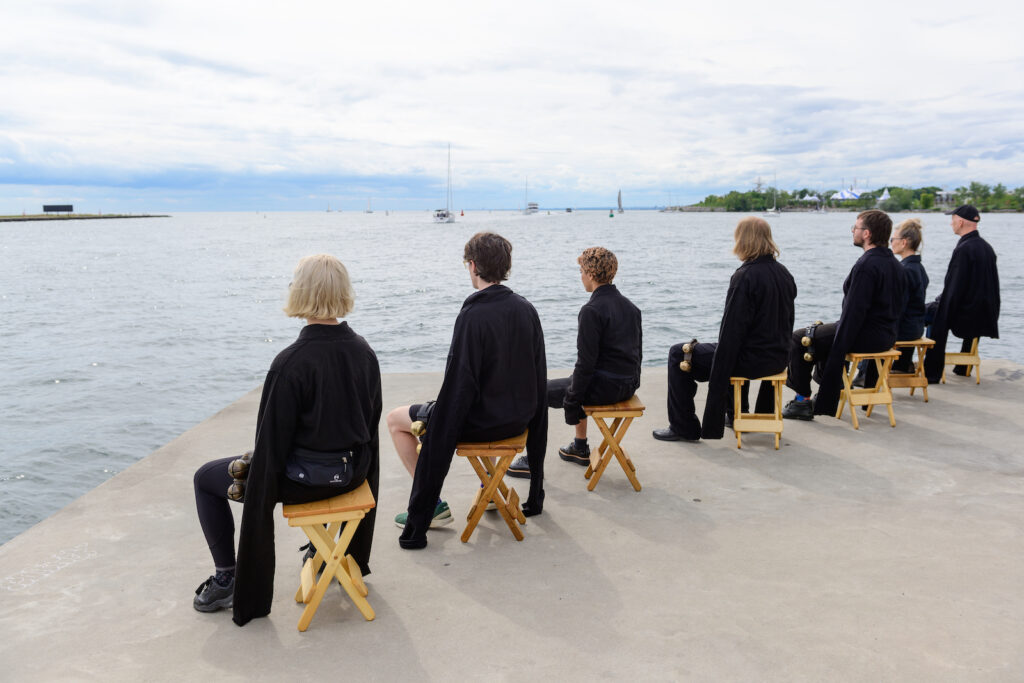 waters/edge invites participants to engage in group walks that result in making ensemble sound / bell songs, near various sites where the water’s edge meets the land. A sounding exploration and sonar reading, waters/edge invites an aural reflection of both the body’s own fluid systems and bodies of water. This work can be understood as a celebration both of being and of the water within and around us.

Opening a space for awareness between flow and structure, between softness and hardness, waters/edge continues from Bell Works—a body of work started in 2007 with a solo performance that became a trio, then an octet, then a group of 13. Bell Works took place  in Vancouver, Paris, Spain, Ottawa, Toronto, and Montreal, as well as various urban and rural sites in Saskatchewan.

All are welcome to come and listen/observe, but for those wishing to participate as bell ringers, Robin will offer several prelude rehearsal sessions. Through a series of somatic based workshops with Robin Poitras, guest artists, and somatic practitioners, participants/public will be introduced to a walking, sitting, and bell ringing journey near the water’s edge. Those attending one or more of the prelude sessions are expected to commit to participating in at least one of the scheduled walks. If you cannot attend a prelude session but wish to participate in the ringing, email here to make arrangements with the artist.

Robin is grateful to artists, friends, and colleagues Bill Coleman and Ann Tutt, who will be sharing their unique practices in rehearsals leading toward the walks for waters/edge.

Robin Poitras is one of Saskatchewan’s most prolific dance and performance creators. Creating dance, performance and installation works, she has been actively engaged in contemporary dance practice since the early 1980s. For many years Robin has traversed the formal worlds of dance and performance art. She co-founded New Dance Horizons in 1986, with Dianne Fraser where she continues to act as Artistic Director. With an interest in research into diverse fields of artistic and somatic practice, she has developed a unique interdisciplinary approach. Robin’s works have been presented across Canada, in Spain, France, Germany, Mongolia and Mexico. She is a recipient of the 2016 Lieutenant Governor’s Lifetime Achievement Award, the 2006 Mayor’s Awards for Business & The Arts’ Lifetime Achievement Award, and the 2004 Women of Distinction Award for the Arts. In 2008, she was one of 7a*11d’s Éminences grises. 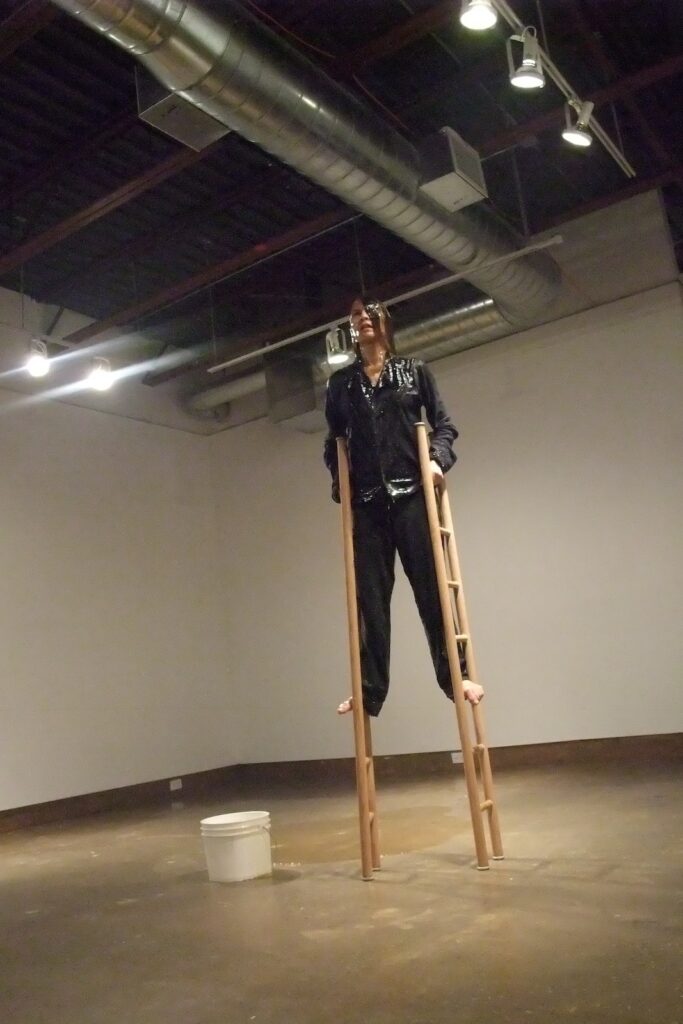 My practice is rooted in a physical world comprised of choreography, dancing and actions/acts. My performance works often involve the use of found or formed objects, texts, images, sound and/or other media. I am curious about relationships and resonance among the worlds of art, science and nature and in exploring how these worlds feed back and forth in mythical, mysterious, elusive and sometimes obvious ways.

Robin Poitras’s practice is centred in movement and dance. She co-founded New Dance Horizons in Regina in 1986, where she continues to act as Artistic Director. With an interest in research into diverse fields of artistic and somatic practice she has developed a unique interdisciplinary approach. Her works have been presented across Canada, in Spain, Germany, and Mexico. She is a recipient of the 2004 Women of Distinction Award for the Arts and the Lifetime Achievement Award from the 2006 Mayor’s Awards for Business & The Arts in Regina. Robin will be joined in this performance by Regina-based artists Brenda Cleniuk and Leanne Lloyd.

Robin Poitras is a Regina-based dance and performance artist. Actively engaged in contemporary dance practice since the early ’80s, she co-founded New Dance Horizons in 1986, where she continues to act as Artistic Director. In 2002, Poitras organized Stream of Dance, a three-day festival devoted to Prairie dance that featured an eclectic blend of styles from ballet and contemporary to Aboriginal and powwow dancing. She holds a BFA honours degree in dance from York University, and has performed as a solo artist throughout Canada, in Spain, Germany, Mexico and Mongolia.

For many years she has traversed between the formal worlds of dance and performance art, and her performance work belongs to a category of interdisciplinary work informed by the rigour and discipline of dance, and the imagistic and formalist qualities of visual art. She uses these disciplinary points of departure to delve into the social and cultural tropes that are classically contained by myth and mythology or obscured in the vernacular by fairy tales, or as dwell in the dynamics of psychoanalysis. Her work interrogates power and the paradigms of control that belie revolution or upheaval precisely because they operate at levels of unconscious complicity and acceptance. She is a recipient of the 2006 Lifetime Achievement Award at the 2006 Mayor’s Awards for Business & The Arts in Regina, and the 2004 Women of Distinction Award for the Arts. During her residency Poitras will “look back and forth in considering my past works and making a new work. The residency marks a return to Toronto, a place and time where I worked and studied for five years and where I first encountered performance art.” Poitras’s residency is co-sponsored by Coleman Lemieux & Compagnie.

During her residency, Poitras will be joined by Regina-based artists Brenda Cleniuk and Leanne Lloyd in performing The Oval, a temporary installation of 24 chairs and 60 rearview mirrors that will be set up and dismantled in public spaces during the festival. They will also perform some times three and the walking women in various public spaces.