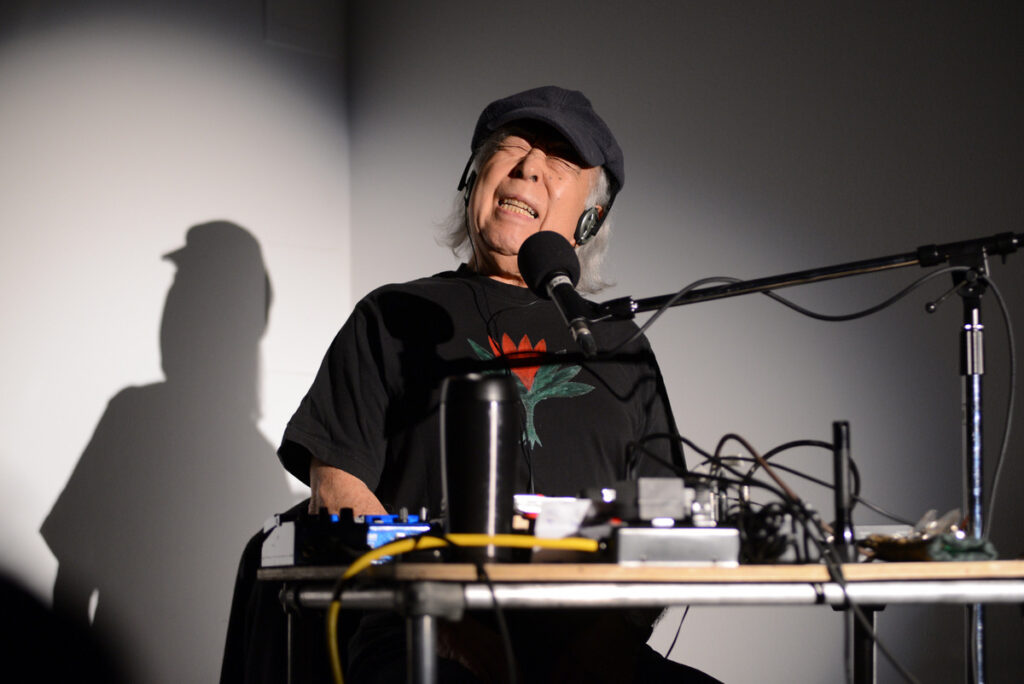 I like the idea of performing without any preconceived notion of what I am going to present. I suppose much of my attitude comes from the influence of John Cage and the idea of ‘chance operations’ and improvisation. There are many forms or degrees of improvisation, but I am of the opinion that a constant flow of new original ideas during a performance is rare. My improvisation depends upon the support of a ‘style’ and ‘mannerism’ in my technique and presentation. I enjoy performing with musicians without having any prior idea of the kind of music they play.

Nobuo Kubota was born in 1932, in Vancouver, B.C. He graduated from the University of Toronto with a degree in architecture and practiced for 10 years before deciding to become an artist. He was introduced to sound poetry by the Four Horsemen in 1984 and is an improvising vocalist, as well as a sculptor, video artist, performer and Éminence Grise for the 7a*11d Festival.

Nobuo Kubota (b. 1932) left behind a 10-year career as an architect in 1969 to become one of Canada’s pre-eminent intermedia artists. For the past 50 years Kubota has performed, recorded, published, and exhibited internationally. He has produced an astonishing array of disciplinary hybrids including sound sculptures, performance-video installations, three-dimensional poems, and improvisational-art music.

Video Lab: Loop Holes (2003) was Kubota’s next public performance sound-installation spectacular. Nine separate video monitors were placed in a grid (3 X 3). Each monitor featured the artist reciting the same improvisational sound poem with the running time of the tape on each monitor advanced by half a second. This collision of sound and image cleverly framed a mediated past to the immediate present and a constantly shifting future.

Kubota never completely abandoned his architectural practice, it continued throughout his career as the structural bedrock of his sculptural installations. Passage (1986), Waves (1992), Sonarcissus (1993), Bending Machine (1993) and Hokusai Revisited (2008) are the most obvious manifestations of Kubota’s continuing interest in the field of architecture.

A recent performance video, Overwriting & OverVoicing (2010) contains a residue of the architect’s past. Kubota begins Overwriting & OverVoicing by drawing a perfect grid on white paper with ruler and pencil. Then he overpaints the grid using a brush and black ink while chanting in a meta-language—the permanence of his delicate, idiosyncratic calligraphy destabilized by the evanescence of sound play.

In 2009, Nobuo Kubota received a Governor General’s Award in Visual and Media Arts, Canada’s most prestigious arts prize. The award is a fitting tribute to Kubota’s tireless work amongst the boundaries of the disciplines constructing and deconstructing beautiful zen-like ambiguities that transcend style and genre.