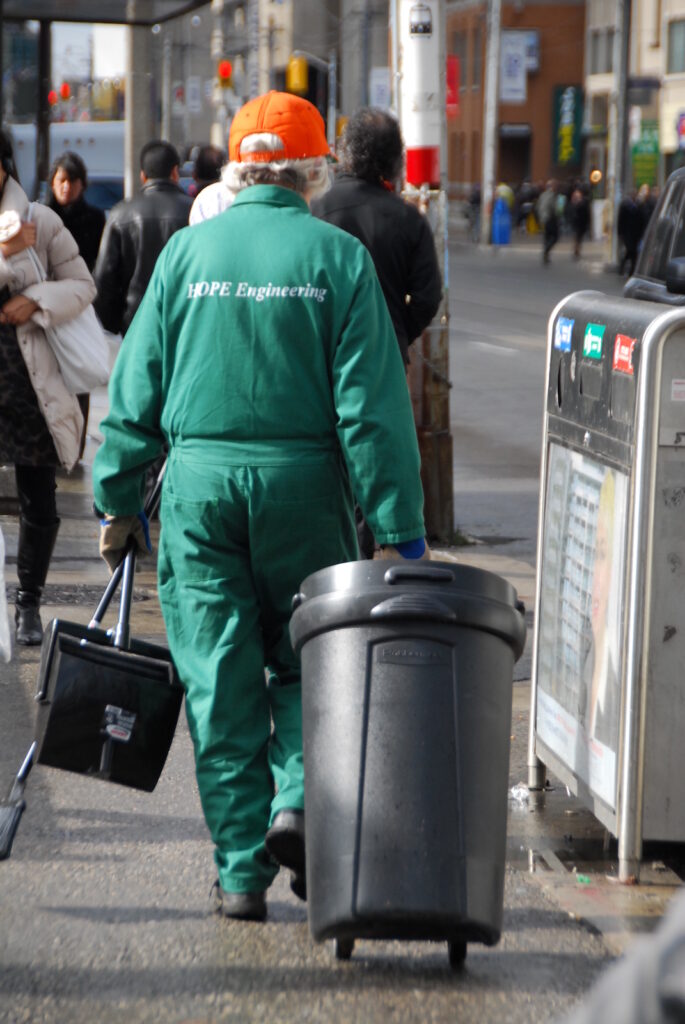 I will collect street rubbish by sweeping around city blocks on a schedule, over nine days. With these found materials I will build an open, lattice-like structure and inside, at its centre, another structure of discarded furniture and refuse. The final work will incorporate circle-like dances, chanting, and video made during the process of collecting.

After beginning his work as an artist in ceramics and sculpture, Glenn Lewis became a member of Intermedia (1968-72), an experimental collective influenced by McLuhan, the “back to the earth” movement, Fluxus, conceptualism, and technology. Lewis has continued his performance work, as well as film, sculpture, ceramics, correspondence art, installation, photography, and video. He was director of the Western Front in Vancouver, was Head of Media Arts at the Canada Council, and bred plants in his nursery on the Sunshine Coast for 15 years.

Born in Chemainus, BC in 1935, Glenn Lewis grew up in Victoria and Kelowna before attending the Vancouver School of Art, graduating in 1958. In 1961 Lewis went to St Ives, Cornwall and studied pottery under Bernard Leach, and in 1964 returned to Vancouver to teach ceramics and sculpture at UBC. From 1966 he began experimenting sculpturally with ceramics, producing a number of unique works which were exhibited extensively. From 1968 – 72, Lewis was a member of Intermedia, an experimental collective of artists interested in new media which was influenced by McLuhan’s writings, technology, the “back to the earth” movement, and international movements like Fluxus, performance, and conceptualism. Performance artists Deborah Hay and Steve Paxton came to Intermedia from New York to give performance art workshops in Vancouver. Lewis, Gathie Falk, Michael Morris and Jorge Saia (later Jorge Zontal of General Idea) were participants in Hay’s workshop. Lewis has continued his performance work as well as film, sculpture, correspondence art, installation, photographs, video. Additionally, He directed the Western Front artist-run centre in Vancouver, was the Head of Media Arts at the Canada Council for three years, and bred new plants in his nursery on the Sunshine Coast for 15 years. Lewis has received a number of awards and grants, commissions and appointments, and has work in the collections of: External Affairs, Government of Canada; Canada Council Art Bank; Faculty Club, Queens University, Kingston; Air Canada; City of Vancouver; Confederation Art Gallery, Charlottetown; Winnipeg Art Gallery; Vancouver Art Gallery; and the National Gallery of Canada. He is currently living and making art in Vancouver.