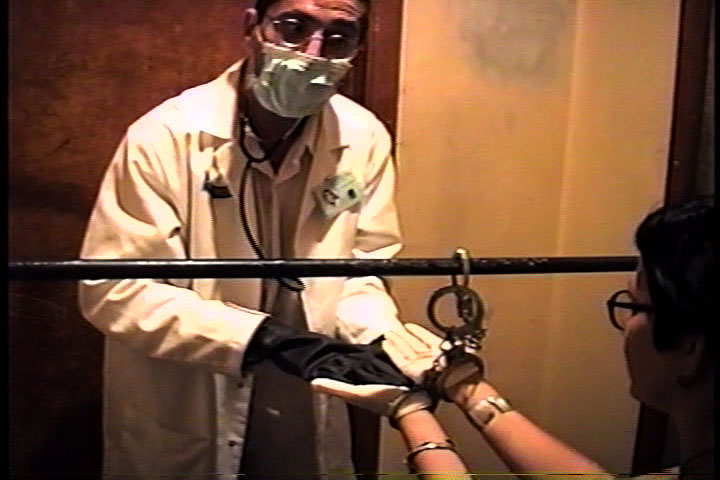 Since testing positive for antibodies to HIV in 1988, I have practiced my art as a ritual of self-healing. I now consider myself to be cured of my dis-ease. My work differs from much of current cultural practice around AIDS in its radical refusal of victim or patient status. I have analyzed and criticized various aspects of western medical ideology through a series of self-photographs, performances, and installations focused on my own body as evidence. I am now examining the phenomenology of the test, in which parts of the body are subjected to arcane processes in laboratories inaccessible to the subject, resulting in ‘diagnoses’ that have profound social implications.

Frank Green studied filmmaking at Kent State University, Ohio, moved to New York in 1980 where he appeared in East Village clubs such as the Limbo Lounge, Pyramid, ABC No Rio and Club 57, became a heroin and cocaine addict, returned to his birthplace of Cleveland in 1988 to clean out from drugs, discovered he was HIV positive, and has spent the last several years practicing his art as a ritual of self-healing. His oeuvre includes works in various media, including audience participatory events, monologues, multimedia spectacles, and installations as well as writing and art criticism. Frank has toured extensively throughout the US and Canada, and is currently working on a major new performance and installation work, of which Anonymous Test Site is a part.