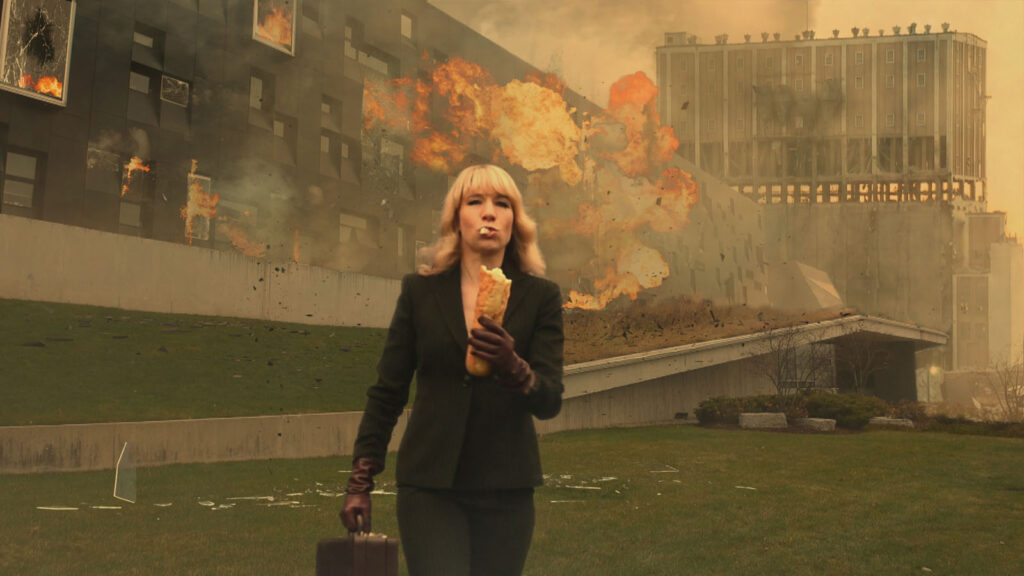 Bombshell plays with the cinematic cliché of the hero passively walking away from an explosion in an unflinching walk. Usually a stoic and emotionless male, our hero has been replaced in Bombshell by a milkmaid, a fairy, a housewife turned superhero, and a business woman who systematically and subversively challenge this trope (and other expectations) in a series of cheeky and explosive vignettes.

Lisa Birke is an award winning Canadian video artist who situates between the traditions of painting, digital video and performance art. She received an MFA with distinction from the University of Waterloo in 2013.  She has had solo exhibitions across Canada and her short films have been screened at film/video festivals and media centres internationally, including: Vancouver International Film Festival (Canada), European Film Festival (touring), Athens International Film + Video Festival (USA), ARTVIDEO LAB (France), InShadow International Festival of Video, Performance and Technologies (Portugal), Cologne OFF X (USA, Israel, India), International Short Film Week Regensburg (Germany), and SESIFF (Seoul international Extreme-Short Image & Film Festival) among many others.  Calendar Girls was awarded a Jury Award for Creative Achievement at the Arizona International Film Festival (USA) and the Jury Award at ForadCamp (Barcelona) in 2015 and was recently installed at Manif d’art, the Quebec City Biennale in Canada (2017).  Bombshell was created for CAFKA 16 (Contemporary Art Forum Kitchener and Area 2016).